After a careful study of protestant England under heretical Queen Elizabeth I and the many tragedies that this brought to Catholicism in England and, subsequently, to other protestant northern European nations, we can easily compare it to the devastating effects and chaos that the blasphemous Vatican 2 "gathering" has wrecked over the Catholic world.

Let's take a look at this quotation from the book THE ENGLISH CATHOLICS IN THE REIGN OF QUEEN ELIZABETH 1558-1580, BY
JOHN HUNGERFORD POLLEN, SJ.

Whereas some years back the Kingdom of England
was infested by heretics, schismatics and infidels, and
whereas Queen Mary had entirely extirpated the said heresies,
and brought back the said realm to due obedience to the
Holy See; she, the said Queen Mary, dying, and Elizabeth
her sister succeeding : the latter, where she ought to have
followed her sister's footsteps, and to have exhorted the
said people to live Christianlike and Catholicly, Nevertheless
this same Elizabeth, instigated by the devil, as is
notorious, inexcusable, and of public fame, erecting her
horns against the apostolic authority, has forced and compelled
the peoples of that kingdom, and in particular
Bishops, Archbishops, and other ecclesiastical persons, to
take a wicked oath against Church liberty, not to recognise
any other supreme governess, whether in ecclesiastical or
in temporal causes, except herself, the asserted Queen, and
this under grave, afflictive and even corporal pains. Also
she has visited the said Bishops and others with her pretended
commissaries, and deprived, despoiled some of them
for refusing the said oath, and bestowed the bishoprics,
benefices, etc., on heretics, married men, and non-clerics.
Also she has consigned to prison all who hear divine offices
and the Mass according to the order of our Holy Mother
the Church, and leaves them to perish and to die. What
is still more detestable, scandalous and of the worst example,
she makes laws, prints heretical books on the administration
of the Sacraments and the divine offices, and commands
them to be observed. Also she does not fear to live and to
allow sermons to be preached in the heretical and Calvinistic
manner, and to tolerate condemned and manifest heresy,
and to hear ecclesiastical causes; she forbids priests to
celebrate more Catholico ; she is present at heretical sermons;
she allows meat on forbidden days; she has the Lord's
Supper celebrated more haeretico ; and commits other
enormous crimes. These things are public to the whole
world, inexcusable, notorious, and redound to the contempt
of the Apostolic See.

The similarities between what happened then and what took place after the tyrannical reign of terror of antipopes John 23, Paul 6 and their heretical successors are, at the very least, striking and blatantly conspicuous. History does repeat itself, especially bad deeds and events.

Lord, have mercy on us sinners ! 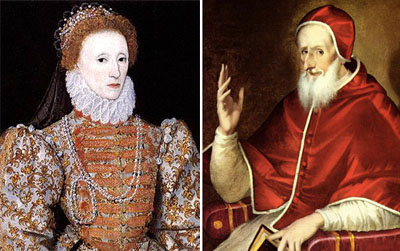