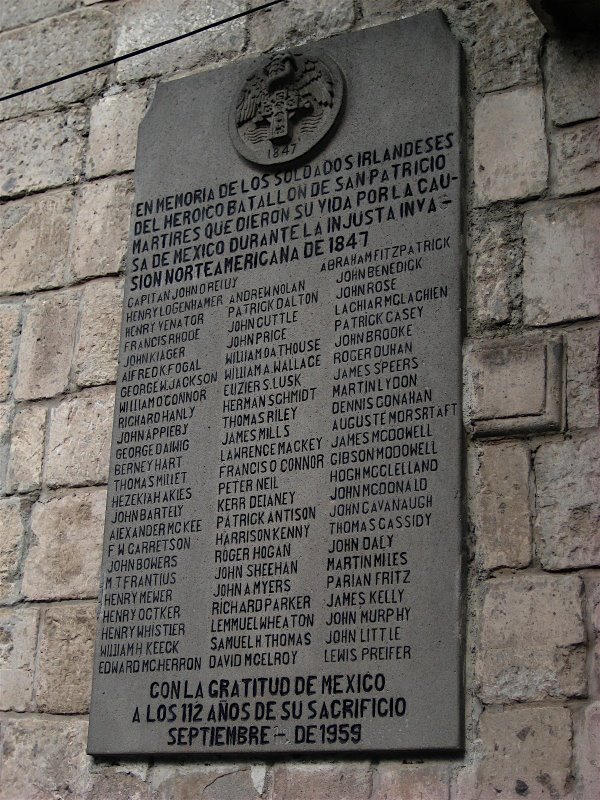 From behind the bullet-scarred walls of an ancient fortress, the wail of bagpipes and a thundering bass drum echoed through a plaza in the center of Mexico City.

Passers-by stopped in their tracks. Children craned for a look as a platoon of Mexican bagpipers marched through the gates in tribute to a strange and divisive chapter of Irish-American history.

The bagpipers play each month in honor of the St. Patrick Battalion, a group of 600 Irish-American soldiers who switched sides to fight for Mexico in the 1846-1848 Mexican-American War. Mexico lost half its territory to the United States as a result of the war.

To the United States, the deserters are traitors. But to Mexicans, the “Irish martyrs” are heroes, honored in street names, plaques and St. Patrick’s Day celebrations around the country. The battalion’s name is written in gold letters in the chamber of Mexico’s House of Representatives, and a ceremony is held in a Mexico City park every year to commemorate the executions of the group’s members.

“It’s a little bit of a weird twist on history . . . and quite romantic for the Irish community,” said Myles Doherty, the Irish consul in Mexico City.

Immigrants turned soldiers
The battalion’s story begins with Ireland’s Potato Famine of the 1840s, which forced thousands of Irish to emigrate to the United States and other countries.

In May 1846, the United States declared war on Mexico in a dispute over the boundaries of Texas. Many of the desperate Irish were recruited for the war, sometimes within days of landing in New York, said Carlos Mayer, a historian and expert on the battalion.

Most of the American commanders were Protestants, and they treated these Catholic immigrants badly, Mayer said. Mexico, meanwhile, was offering land and higher wages to its recruits. As the fighting wore on, some of the U.S. recruits began to grow restless.

“Many of them began to realize that Mexico was a fellow Catholic country that was being invaded and that was really defenseless in the face of the American military superiority,” he said. “So they began switching sides.”

The deserters were led by John Riley, an artilleryman who had previously fought in the British Army. They were joined by a few Swiss, French, Scottish and German recruits, most of them also Catholic.

Called los colorados, or “the redheads,” by their Mexican comrades, they fought against the Americans at the key battles of Monterrey, Buenavista and Cerro Gordo.

The Americans eventually reached the outskirts of Mexico City on Aug. 20, 1847. Mexican troops, with the remaining San Patricios handling the artillery, pounded the American forces from a monastery-turned-fort on the Churubusco River until they ran out of ammunition.

Thirty-five San Patricios died in the battle, 85 were captured and another 85 retreated with the remnants of the Mexican army.

On Sept. 13, 1847, the Americans seized Chapultepec Castle in the war’s last major battle.

San Patricios who had deserted before the war were branded with the letter “D” on one cheek. The rest were hanged, including 30 who were executed at the foot of Chapultepec Hill.

“They were hanged at the moment that the American flag was raised over the castle of Chapultepec so that they would take that sight to hell with them,” Mayer said.

Mexicans consider the war a blatant land grab by the United States, and the loss continues to haunt relations between the two countries today.

Awareness today
The former monastery of Churubusco, where the San Patricios were defeated, is now a national museum dedicated to the invasions Mexico has suffered. The bullet holes are still on the walls, and the cannons commanded by John Riley stand outside.

The first Sunday of every month, the St. Patrick Battalion Pipe Band plays in the soldiers’ honor. And on several weekends each year, an actor portraying Riley gives talks to schoolchildren and tourists. The San Patricios were seen much differently in the United States, even by fellow Irish immigrants, said Ian McGowan, archivist at the Institute for Irish-American Studies at the City University of New York.

“In the military particularly, there was a sense of shame,” McGowan said. “For a good 40 or 50 years they were almost completely forgotten about. The unofficial position of Irish who were looking to become Americans in the 19th century was not to discuss them.”

Recently, however, Americans have begun to pay more attention to the battalion. Historians have written a number of books about it in the past decade, McGowan said, and in 1999 MGM released a movie about Riley, One Man’s Hero.

Bernard Brennan, an Irish-American tourist from San Francisco, said he had become curious about the battalion after discussing it with a Mexican friend. On a recent afternoon, he snapped pictures of a carved stone plaque marking a Mexico City plaza where 16 of the Irish soldiers were hanged. The plaque reads: “In memory of the Irish soldiers of the heroic St. Patrick Battalion, who gave their lives for the cause of Mexico during the unjust American invasion of 1847.”

Brennan said he doesn’t see the soldiers as traitors.

“As an Irish-American, I’m proud of them,” he said. “Sometimes you have to stand up and say, ‘What my country is doing is wrong.’ I think they’re heroes, heroes of conscience.”